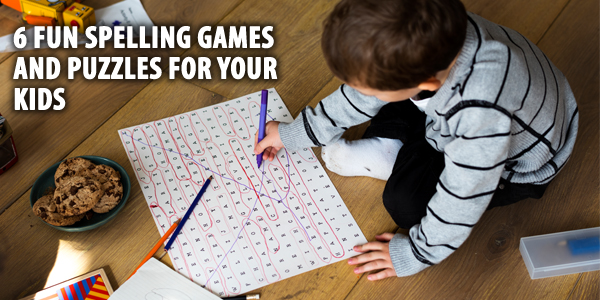 Wondering how to keep your kids entertained within the confines of the house, while also being concerned about them losing touch with their learning schedules? Well, spelling games are the answer to both your concerns, for not only do your kids get to enjoy spending time with the entire family when playing these games but also end up improving their vocabulary and spelling skills.  Let us take a look at 6 such fun games:

No list of spelling games will be complete without mentioning scrabble. This game has been enjoyed by people of all age groups, over the course of many years. In this game, two to four players sit across each other over a square board imprinted with a grid of cells. Players take turns forming words, by using tiles (small square pieces made of plastic or wood). Each of the tiles has a letter imprinted on them and are placed on individual cells of the board to form letters.

Another very popular spelling game, quiddler is actually a card game with a difference. Each game played consists of eight rounds, players are dealt with three cards each for the first round, as the rounds increase so do the number of cards each player gets. Players have to form words using the cards they have and get points accordingly.

Based on the spelling bee competition (where children are given a word and have to spell it out) held in the United States. This game set consists of numerous bee shaped pieces with words written on them. Start the game by picking up one bee piece and reading out the word for your kids to spell out (they can spell it out verbally or write it down).

An excellent word puzzle game that helps improve your kids’ vocabulary and spelling skills. There are numerous crossword puzzle books which are specially created for children available in bookstores and online stores nowadays, there are also numerous online printable crossword puzzles. A crossword puzzle usually consists of a square block divided into grids consisting of white squares interspersed with black squares. Words (the starting letter being numbered) can be formed both vertically and horizontally, using clues (with the corresponding numbers) provided below the square.

Also known as a word finder puzzle, boggle is available in the form of game sets and books, there are also numerous online versions which you can take a printout of for your kids to play. Boggle consists of a grid containing numerous letters which at first glance seem to be placed randomly, however, there are actual words contained within this grid. These words may be placed horizontally, vertically, or even diagonally, most times a list of the hidden words is provided next to the grid (giving your kids a helping hand).

Spelling games do not always have to be from game sets or books. There are numerous paper and pencil games that help improve spelling skills. One such game is ‘Name Place Animal Thing’. Here a letter is randomly picked by one player and all the players have to write down a name, a place (city, country), an animal and a thing starting with that letter. This game while improving spelling skills also introduces your kids to names of countries, cities, and animals they may not have heard of before.

Whatever game you pick to ensure you play along with your children,  spending quality time with them is what matters at the end of the day.