Here’s something you can teach your child today. Introducing… 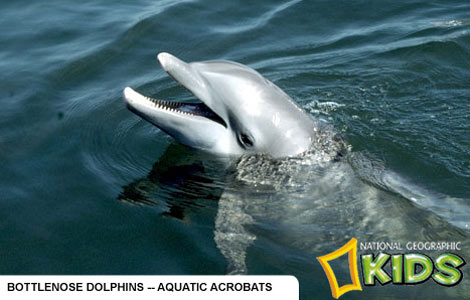 1) Their moans, groans, squeaks, whistles, and grunts can sound as if they’re a heavy metal band. But bottlenose dolphins make their own kind of music. server address . Many of the sounds they make could be imitated by holding a balloon tightly by the neck, then letting the air out faster and slower.

2) Bottlenose dolphins send messages to one another in different ways. They squeak and whistle and use body language—leaping as high as 20 feet (6 meters) in the air, snapping their jaws, slapping their tails on the surface of the water, and even butting heads.

3) So what are they trying to tell each other? They can alert each other to possible dangers, let others know there is food nearby, and keep track of others in the group. Nasal sacs inside the dolphin’s head are what make it possible for the dolphins to vocalize.

4) Blowholes located in their heads open and close, allowing the dolphins to breathe. (Being mammals, dolphins have to come to the water’s surface to breathe, just like you.)

5) Dolphins also produce high frequency clicks, which act as a sonar system called echolocation (ek-oh-low-KAY-shun). When the clicking sounds hit an object in the water, like a fish or rock, they bounce off and come back to the dolphin as echoes. Echolocation tells the dolphins the shape, size, speed, distance, and location of the object. Each individual dolphin seems to have its own signature whistle, but the sounds we can’t hear may be the most important.

Source: National Geographic Kids – CLICK HERE for all 18 facts about the Bottlenose Dolphin, photos, videos, maps, create an e-card, or print a picture of this magnificent creature.