Have you heard of an ‘Empathy Map’?  Seasoned writers and marketing people use it to communicate with their target audience and get better results. It occurred to me that an Empathy Map might be quite useful for a parent to understand the child better. 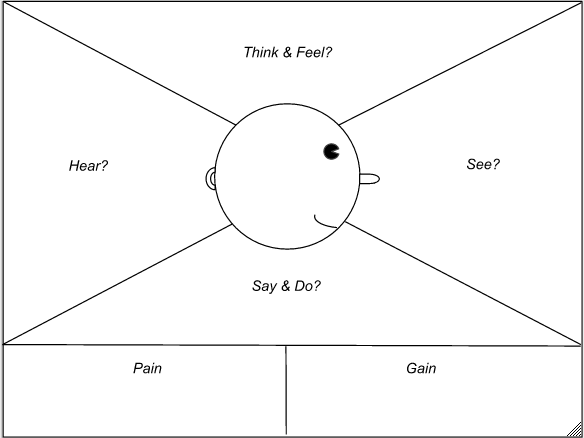 Create an Empathy Map for a 15 year old kid, Vijay.

What does Vijay see around him?

What does Vijay hear around him?

What does Vijay think & feel?

What does Vijay say & do?

I recently met Abhay.  Abhay’s parents were keen for him to meet someone outside the family, to get a handle on what Abhay wants to do. I used an empathy map to understand Abhay. Here is what I found.

Abhay is a bright kid. Plays hard works hard. He has a mind of his own. He studies in one of the top schools in the city. His friends come from affluent families. Many of them get dropped to school in a BMW or a Merc. They carry ipads, iPhone (latest models etc). Some of them are nice but some others flaunt their wealth. Abhay is not jealous but it bugs him when they show off.

Abhay keeps hearing about young people who are successful. Not just in business but even in sports and other fields. “Studies alone will not make one successful.” Says Abhay. He also sees how young people have become so famous. His heroes are people like Mark Zuckerberg who changed the world!

Abhay is rather reticent. He does not say much, though he knows a lot. One reason is that his parents constantly keep interrupting him or correcting his facts or grammar. So he just clams up. However with his friends he is the life of the party. They call him Mr Google Of India.

He likes to be seen as a smart guy, who knows what he is talking about. However he is not the argumentative type. He does not suffer fools but does not let his disgust show. He thinks success is more than money and fame. According to success is when you achieve your dream small or big, whatever that may be. His dream is to run a school without teachers.

What upsets him most is that people just don’t spend time to understand his ideas but jump in to criticize him. That really bugs him. Some times when his parents do that, he feels really sad.

He can’t stand arrogant people; he avoids them like the plague.

He is afraid he may not be allowed to follow his passion. (He has often thought about running away from home!).

On days he feels good, he thinks he can persuade his parents to see his point of view.

If you are Abhay’s parent, will this description help you get into his shoes? Therefore, will it help you communicate better and more effectively with him?

Should you share what you have understood with your child? It may be a good idea.

One final word. This is about listening with your head and the heart. Not giving advice. (Resist the temptation to jump in to talk about what you did when you were his age!) Have fun!

Sridhar Ramanathan is the Founder of IDEASRS, where he is also a Strategic Innovation Coach. Sridhar’s mission in life is “to help those who want to do things better and differently”. His work involves conducting creative problem solving workshops for clients, and buidling competencies in creativity and innovation. He also blogs at www.ideasrs.com.