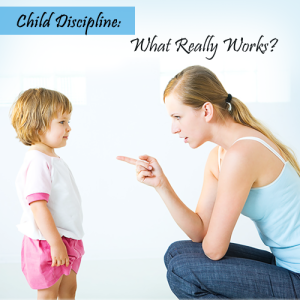 The only things more distasteful than an undisciplined child, is the process of disciplining itself. Some parents start with disciplining at an early stage and some start later, only when the tantrums become too much to bear. The key here is to start early.

It is important that they understand that you are in charge, not them. But this can be a tricky undertaking. Disciplining without hurting a child’s fragile sense of pride is the key here.Spanking a child was considered as an okay thing for parents to do about a couple of decades back. Today, in the light of new medical evidence, spanking is shown to have negative impact on a child’s psyche. Parents are looking for alternative methods of discipline and avoiding the dreaded spanking.

Set the rules early and be consistent:

By the time your baby is 4 years old, you should have already laid down basic rules, no more than 4 or 5. These rules should cater to bigger problems like No hitting, always saying please and thank you, washing hands before eating, etc. Don’t fight smaller battles if you wish to win the bigger ones. The most important part of setting the rules is to stand by them. Go over the rules with your child whenever they break one.

Praising good behaviour is more likely to beget good behaviour than scolding whenever a rule is broken. This doesn’t mean that you shouldn’t scold them when a rule is broken. Just don’t forget to praise the child when a rule is kept by him or her.Saying “no” firmly: Saying a no should always be done firmly. Never use an angry tone, no matter how angry you are at that point in time. Whenever you have to say no to a child, explain why they can’t do or get something that they want. But explain only once. Use a firm tone and stand your ground. The first few times will be difficult, but the message will get across soon.

Sometimes a child breaks a rule or does something he or she was not supposed to do simply because they can’t think of something else to do or they don’t know another way to do the same thing. Help your child by giving him choices. For example, if you are resting and your child is playing too loudly, tell him you are unable to sleep because of the noise. Then you can give him the choice of sitting with you and reading a book or going to play in their room until you come to get him.

There are many other alternatives; here is a list to take a look at:

* * The Top 10 Tips for Disciplining Toddlers by Clare Albright

* * Positive Discipline For Toddlers and Preschoolers by Meg Berger, M.Ed.

* * Help! I Can’t Control My Four Year-Old and Don’t Want to Resort to Spanking! at http://