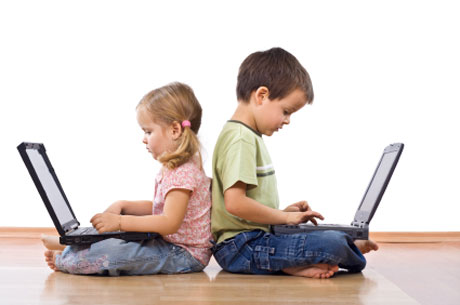 I am still not sure if I would be lucky enough to drop in at ParentEdge premises soon and have a chance to gauge what the perception is on how technology leaves its mark on children – an issue which has been in my mind for long. So I thought – Why not pen down my thoughts on this topic and hope for readers to put forth their thoughts and opinions too? It’s easy to think of the good and bad effects of anything and see if the good outweighs the bad or not and accordingly decide to accept or shun it. Here it’s not so easy because no matter how much we discuss the impact of technology on kids today, we all know its presence in our lives is only getting stronger each day and we better know how to deal with it, handle it and use it, else we’ll be strongly controlled by it even before we come to know about it.

As a mother of two – a kindergartener and a junior school student, and somebody who has the fortune of sharing friendship with many mothers whose children are in the age range of 1-16, I can say technology has become a permanent and integral part of our life and is thus welcomed by our children too. When a parent is in continuous association with some form of technology or the other throughout the day, is it a surprise that the child too considers it an essential part of life, that there is nothing wrong with it? I had a sudden urge to focus on the different modes through which most of the children around, including mine, are exposed to technology. These are cell-phones, computer games and Internet mostly that come to my mind, besides PS3s and a few other things that, of course, aren’t within the reach of every child I see around.

How is cell-phone affecting a kindergartener?

I have seen how my almost-ten-year-old son gets glued to it and spends fiddling with it in the car during some week-end drives down to an eatery or a shop because playing games on it is far more thrilling than looking out of the window to catch different kinds of sights or even a chit-chat with us sitting inches away from him. A great opportunity of the rare father-son communication lost right away, but who is bothered anyway? That is enough to inspire my kindergartener who waits for an opportunity to grab it and keep tapping it for a continuously changing screen. She knows she has an equal right to it since it’s her father’s and sees it as a great time-pass tool – as if we have frequent or boring family talks over the weekdays!

What would she know about the behavioural issues cell-phones cause amongst very young children?! Did you know that cell-phone is fast becoming a “coming of age”-symbol for the preteens in my neighbourhood? A mother narrated to me the other day how her naïve eleven-year-old daughter is not allowed to be part of the group of girls her age because she doesn’t sport around a cell-phone during her evening walks! It doesn’t occur to the girls that evenings are for playing around and making the most of the free time and investing in their health through outdoor games and not strolling around with cell-phones! I’ve even caught my son poring over his friend’s PS3 during the time I thought he was playing around!

The same boy, years ago, had once wisely told him his mom had said he should spend time on such things than have an afternoon nap (that was supposed to be a way of preparing the boy for adjusting to long hours in school when he was about to move up from short hours at kindergarten to junior school!) What I feel is children don’t really need cell-phones. Computer games is again another mode of entertainment that snatches away the evenings from the growing children. They definitely do make them more tech-savvy and smart and alert, but surreptitiously adds issues like child obesity and disturbed sleep patterns and often hyperactivity too to a teen’s and a preteen’s life.

My next-door-neighbour’s ex-tenant took quite some time to track down her four-year-old son’s short attention span in school to his long hours with computer games. And now I come to my favourite – the Internet. I see how Mindspark, an online Mathematics program my son works with on Internet that he has been introduced to in school, excites him and goads him to complete problems at his fastest pace to help him win stickers he could brag about in school. I also see how he can do research on school topics when he sits down on Internet, but I also wonder how long I’ll have to keep my watchful eyes on him lest something inappropriate pops up on the screen and draws an unsuspecting but curious boy into a world for which he is still not prepared. I also see how he is negotiating with me on doing fewer written problems (needed for a strong base) for more Mindspark time that involves just a click and pressing buttons. But I also think of how I had copied verbatim his hand-written notes on some Creative Writing topics on my laptop and then to thrill him had uploaded them on a blog area I had created for him and which I operate and he only gets to see once in a blue moon. His eyes glazed when his mentor at Magic Puddles, seeing it, had praised him, saying how well he had written about his summer camp experience there, but emphasizing that he kept writing in his notebook which I could keep copying. It gave my son a confidence and a much-needed push to be in the habit of writing on such topics.

Without Internet, would an eight-year-old’s writings ever catch anybody’s attention? (He had begun writing on such topics when he was eight which I later typed and uploaded). Thanks to computers again, my almost-four-year-old daughter, is picking up phonetics, though slowly, much before her brother had begun with it all in school, all because of educational programs shown on the computer in school now and then. So I come to accept that everything is not bad about technology just as everything is not good about it, either. But I do have a vague fear that technology is intoxicating us all.

Children are too powerless before it to realize its huge effect on them, too young to know how much of it is just right for them and that it can begin to control their life, excite them, and even distract them from their highest priority – studies – with new things happening in the field all the time. Being bitten by the technology bug is like catching a contagious disease. One boy in the neighbourhood gets addicted to it and it spreads like wildfire.

With many parents today working for long hours and returning home stressed out and tired, how much of policing can they do on their children?Let us keep a check on how much we are exposing the young, tender, impressionable minds to technology, at what frequency, how long, when and in whose presence (under a guardian’s watchful eyes) and most importantly, checking and controlling what exactly they get to see and experience through technology. Leaving them to research on a project topic on Internet while one goes for shopping may not be a good idea, as my neighbour feels. Let us explain to them they’ll be given more freedom in this matter as they grow and gain more maturity.

My son came home recently after a bout of cricket with his friends, a few of them older than him, asking if I could open a few Facebook accounts for him (he doesn’t have one till now), mentioning one of them has fifteen! Surprised, I asked him, “Why?” He replied, “To make friends!” When I said he is lucky to be in an apartment complex teeming with boys, many of whom are already his friends, he said, “But Facebook friends I want!” What he couldn’t or didn’t articulate was that he just wanted to be like one of those senior boys, moving around with an air of importance, and bragging about the number of Facebook accounts he has. He thought he could “grow up” in a jiffy the easy way! Technology, if used wisely (rationing of “tech” hours for right contents in the presence of a watchful guardian), will make the children smarter and well-informed. It’s like medicine – an overdose or the wrong prescription will do harm instead of good. It is also very addictive – even I feel so as an adult, as I try to discipline myself with limited number of “tech” hours with my computer.

Let us be wary to keep alive and strong our age-old Indian culture of working hard as students to be able to have a decent, stable future (that Obama is exhorting American students to do for a firm base in Science and Mathematics), not letting our children succumb to excess of technology and automatically pay less attention to academics and core subjects, while encouraging them to maximize the gains from it with the help of teachers and parents and knowledgeable adults. Technology will definitely leave its mark on our children – let’s hope it’s a positive one, on the whole.