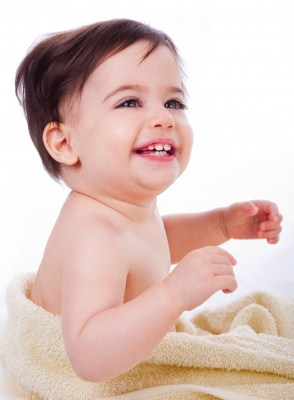 Thumb sucking is a concern many parents have. Toddlers suck their thumbs because it’s comforting and calming. It’s probably something they did before they were born and revert back to it when they are nervous, agitated, scared or ill. . They may also use it to lull themselves back to sleep in the middle of the night.

Parents shouldn’t concern themselves unless it continues after the age their permanent teeth begin to appear, around six years old. Experts say that it’s the intensity of the thumb sucking and the tongue’s thrust that deforms teeth and makes braces necessary later. Children who rest their thumb passively in their mouth are less likely to have difficulty than children who suck aggressively. If you’re concerned, closely monitor your child and analyze his technique. If they appears to be sucking vigorously, you may want to begin curbing their habit earlier.

Punishing or nagging your child to stop won’t help because it’s usually an automatic response. Attempting to curb it by putting an elastic bandage on his thumb or another method will seem like unjust punishment, especially since they indulge in the habit for comfort and security.

Try to wait it out. Children usually give up thumb-sucking when they’ve found other ways to calm and comfort themselves. my ip . Consider offering them other alternatives to comfort themselves such as a soft blanket or toy.

The key is to notice when and where they are likely to suck their thumbs and offer an alternative. If it happens while they are tired, try giving more naps. If they suck their thumb frequently while watching television, try to distract them with a toy that will keep their hands occupied.

Older children may need gentle reminders to curtail thumb sucking while in public, and praise should be given freely when the child finds and uses an acceptable alternative. Your child’s pediatric dentist can offer other suggestions for helping your child kick the thumb sucking habit.