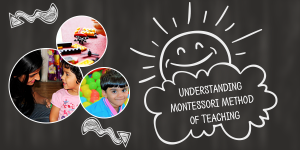 After this she was convinced that if regular children were allowed play independently and choose the activities that they were interested in, they fared much better.
Much has been written about the Montessori method of teaching and its benefits. But today we bring you an account by a former Montessori teacher and a new mother to a 4 year old girl, Shalaka Mahadik.
I have learnt a lot from my Montessori teaching days. I do believe that I am a better mother to my daughter than I would have been otherwise. I was able to recognize when my daughter was going through a developmental phase and needed my support. When she started crawling, her best game was to climb up on things. Whatever came in her way was like an obstacle that had to be conquered! I remember my friends telling me what a little adventurer she was, but I needed to protect her from falling as well. So here was a typical dilemma that many mothers face.
The child has not yet acquired a sense of danger and obviously needed to be protected against a potential fall without hindering her explorations. She was also learning a new skill at that time and quashing her attempts at any perilous climbs was going to hinder her development if stopped repeatedly.
We were living in a apartment where there weren’t any stairs so I made a makeshift climbing base for her with cushions on each side for a soft landing. Well my daughter went up and down through the day for an entire week!
Not surprisingly, Shalaka enrolled her daughter in a Montessori Playschool. She also emphasizes the importance of mixed peers groups in a balanced development of a child.
The mixed age group creates an environment where I have seen children become more patient, helpful and able to interact freely. Not only do they learn a lot from each other but it also allows them to have a sense of community inside the class. The world is not full of people who are the same age, so why should children be kept in a learning environment that doesn’t expose them to a varied age group?
Is there a downside to Montessori? We asked Shalaka.
Well apart from the fact that it is harder for teachers to teach a varied age group instead of one, I personally haven’t seen any downside to Montessori Method of teaching!
It is always great to know what you think! Please share your stories with us below.