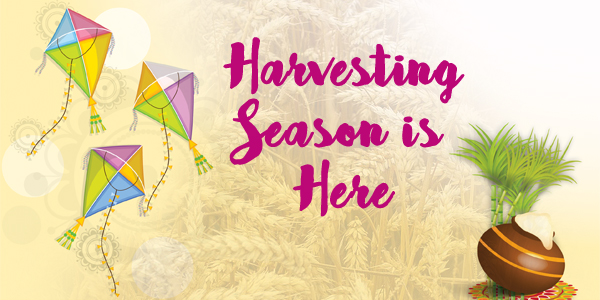 The Diverse Harvest Festivals in India – a closer look

With the harvest festivals like Makar Sankranti, Bihu, Lohri and Pongal right around the corner, we are all excited to see what this harvest season has in store for us. We were taught that these harvest festivals are one of the most fun-filled but equally important festivals for the farmers across India.

Therefore, it is our duty to educate our kids about these harvest festivals and their significance in India. This will be a fun-filled opportunity for them to see how these festivals are celebrated and why they are important.

Here are some ways that people celebrate these harvest festivals across India:

Pongal is one of the most celebrated festivals in the state of Tamil Nadu. It is a 4 day long festival during the season when rice, turmeric, sugar-cane and other cereals are harvested. Typically, the celebrations consists of boiling rice in an earthen pot and making a sweet dish out of it, in the process allowing the rice to boil out of the pot while the people shout ‘Pongal O Pongal’.

The word Pongal means ‘to boil’ in Tamil. The first day is celebrated as Bhogi where useless house articles are thrown in the pyre and burnt.

The second day is when the rice is boiled in a pot outside of the house accompanied by sugarcane and other sweets for consumption.

The third day is known as Mattu-Pongal and is celebrated by decorating and worshipping the cows. The word mattu means ‘cow’ in Tamil.

On the fourth and the last day of the festival, also known as Kanu-Pongal, various kinds are flavored rice are kept on a betel leaf and fed to the crows. Women perform this ritual for the well-being of their brothers.

All in all, Pongal is a very joyful festival and brings out a lot of important Indian values of togetherness, respect for animals and humans and care for family.

Lohri – the festival that marks the winter solstice

The Punjabis are known as the happy clan and their festival Lohri is no less when it comes to celebration and pomp. According to the Punjabi folk lore, Lohri marks the day of the winter solstice. It is celebrated with a lot of joy and is associated with the harvest of the Rabi crops.

The Punjabi farmers regard Lohri as a bookmark of the agricultural year. Its main component is bonfire. Similar to the trick or treat tradition in Halloween, children are given sweets and savories as they go from house to house singing folk songs and making merry. The bonfire is lit in the evening and the kids throw some sesame seeds, jaggery etc. in the pyre and dance around it.

It is definitely a festival of light as you can see bonfires burning at various city centers throughout the city and soothing folk tunes wafting through the air.

Makar Sankranti – the festival that marks the arrival of longer days

Makar Sankranti also known as Makara Sankranti is celebrated after the end of winter solstice signifying the return of longer days and transitioning into the days of sun. Makar Sankranti is believed to be a time of peace and prosperity and is celebrated throughout India in various states like Karnataka, Delhi, Andhra Pradesh and almost all the other cities in India.

Makar Sankranti is known by different names like Bihu in Assam and Uttarayan in Gujarat. Predominantly, til barfi (a sweet made of sesame sweets) and gud (jaggery) are consumed during this festival.

The most famous ‘Kumbh Mela’ is also held during the time of Makar Sankranti. It is celebrated across the nation by flying colorful kites and serving mouth-watering delicacies at home.

India is a diverse country and has similar festivals celebrated across the nation in different ways. Once you teach your children the culture associated with each festival, they will be able to celebrate it with increased joy and happiness.