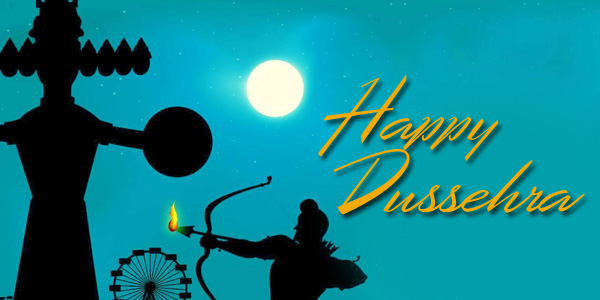 In the line of festivities that will follow Dussehra is considered to be one of the most important and auspicious festivals in India. This festival is celebrated in various forms of grandeur across the Asian Sub Continent. The name Dussehra comes from the Sanskrit term Dasha-hara which means ‘remover of bad fate’. This festival also goes by other names; Vijaya Dashami or Vijayadasami, Navratri and Durgotsav.

According to the Hindu Calendar this festival falls on the tenth day of the bright half (Shukla paksha) of the month of Ashwin (Ashwayuja). It is a very auspicious holiday in India and celebrates the victory of good over evil.

The Puranas also state that warrior Goddess Durga slayed the buffalo Demon Mahishasura on this day because of which she also referred to as Mahishasura Mardhini.

The festival of Dussehra is celebrated by having special prayer meetings and food offerings in homes and temples from the 1st day to the 10th day. Huge fairs and special parades are held with large effigies of Ravana. The streets throng with the sound of song and drums bringing out the creativity of the locals as they burn the mythical king of ancient Sri Lanka on bonfires.

Now let’s get to the Crux of the Matter. Why should we celebrate Dussehra?

Here are 5 reasons why you should

However powerful and vicious the evil within there will always be a divine force within allowing the good in you to become stronger.

Wishing you all a happy Dussehra!