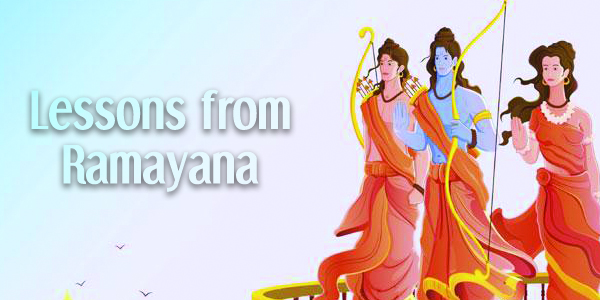 The Ramayana is one of the prized possessions of the Indian Mythology and is looked up to not only by followers of Hinduism but also other religions and cultures of the world. It should be our practice to learn from the life lessons this great epic has to offer. In this way you can also inculcate in your children good morals to live life by and educate them about our Indian culture.

No matter what the consequences, you must always be true to your word and honour it. For the sake of keeping his word given to Queen Kaikeyi, King Dasharath had no other option but to send his most beloved son Rama on exile, even though it was on wrong her part to ask such a thing of her King. In response to that Rama accepted his fate gladly just for the sake of honouring his father’s word.

One good lesson learnt is that you must never pay any heed to any wrong or evil advice that is given to you. The very fact that Kaikeyi took Manthara’s evil advice and asked those things of King Dasharath, was the sole reason for the death of their king and all the miseries that flooded their lives.

Sita was mesmerised by the beauty of the Golden Deer to such an extent that she pleaded with Rama to get the Deer for her. This attachment gave birth to all the sufferings that she had to go through when she got abducted by Ravana while Rama went to get the Deer. This teaches us that attachment is followed by suffering.

Lord Rama has always been personified as “Maryada Purushottam”. This means that his every step led him towards being righteous in life. Be it, letting go of his Kingdom to honour his father’s word or forsaking his wife, Sita, only because one of his subjects pointed his finger at her.

Bharatha has set the best example for us when it comes to not accepting what is not rightly yours, by not accepting the throne when his brother Rama was sent away in exile by his mother Kaikeyi in an unjust manner. He is considered the noblest character of this particular epic.

There is no such thing as caste and creed in front of God’s eyes. He accepts everyone’s love and devotion equally, this was made clear when Lord Rama happily ate the berries that Sabari had nibbled on, to ensure that her lord gets only the sweetest of the fruits.

When a woman’s honour is at stake. Never think twice to go and save it. We learn this from the noble bird Jatayu who gladly gave up his life trying to save Sita from the evil grasps of Ravana. And to honour this noble deed Lord Rama himself performed all the last rites of this great bird.

The relationship that Lord Rama has with his passionate Devotee Hanuman has always been glorified and talked about. This pair stands as a living example of true love, devotion and friendship, to such an extent that Hanuman tore open his heart to show that his Lord forever rests in his heart.

Even though Ravana was blessed with a boon of being immortal by Lord Shiva himself, it was his immense pride that finally led to his death. Hence we learn yet another lesson of humility, when we see that it was Ravana’s brother Vibheeshana who played a key role in his death.

One of the main and most important lessons that we must take away from this great epic is that we on our own must take the effort to kill all the demons we have within us. The only way to stay on the right path would be to have true love and devotion towards the Lord.

As long as you keep taking notes from these lessons that the Ramayana has to offer, you will be on the right path to leading happier and fulfilled lives.