World Peace – One Kid at a Time, The Indian Way!

Over the years, we are living in a more and more divided world that is fraught with wars, terrorism and threats to humanity. If we are to bring back peace, mutual respect and tolerance, I feel we as parents must start digging deep into our Indian roots, while having a global mindset. The Mughals came in and caused mayhem in this land, followed by The British who caused severe economic and spiritual damage, while to a large extent even damaged the self-esteem of Indians.  They left behind an education system, that got us jobs and helped us communicate in the English Language, but it was and is still an education that is devoid of self-awareness and introspection. In essence, most schools offer literacy programs and leave the real education and values bit to parents. We parents too being the victims of varying degrees of colonial hangover judge people and so-called education and science through a predominantly western lens. 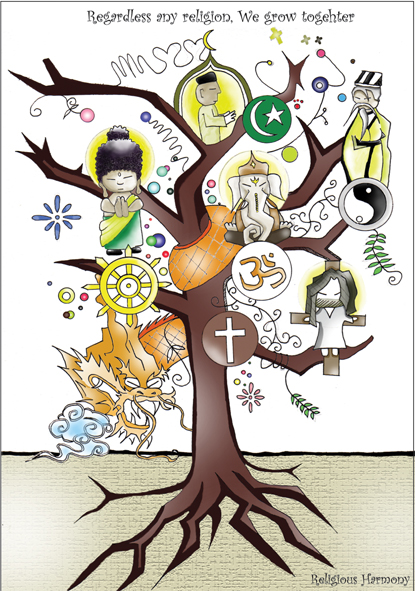 The Indian Gurukul system’s foundation was that of self-awareness, introspection, dharma (righteous living) and the impact of ones actions and their equal and opposite reactions (Karma). This, with the essence of Sanatana Dharma’s intrinsic secularism that believes God is within every creature and there are multiple paths for human beings to realize him, have held India in good stead, because of its deep-rootedness on the home front (though severely diluted in urban settings post the British era). What is even better is that this Dharma believes in mutual respect and undoubtingly and affirmatively accepts that all religions when followed earnestly, peacefully and without harming fellow human beings help their followers understand the ultimate truth and find God within; irrespective of what they call this God / force / supernatural power / energy (Can there be any ideology more secular than this?). Yoga and meditation were an intrinsic part of the Indian education system but that too has fallen by the wayside over the last 6 decades in a career-oriented, competitive and marks based British education system.

Whether people would like to accept it or not, the very reason behind India’s secular fabric is because most Indians irrespective of their faith or religion believe in Dharma (At least to the extent of not harming fellow human beings) and Karma. These are more linked to Indian culture and way of life rather than being a purely religious practice, and hence has helped so many religions peacefully coexist and thrive. What is sad is that many schools, for the want of being ‘secular’ in a very warped sense, even today do not teach these topics through intellectual debate and experiential mechanisms like meditation and yoga. Enquiry and looking within is the foundation of a human being becoming self-aware. It is the most important aspect for people to experientially realize the oneness and interconnectedness of every person and creature on Earth and the Universe. Today many schools in the US and Europe have started adopting meditation and yoga into their curriculum, while Indians continue to debate about what is secular and what is not. Repeatedly neuro-science experiments prove the benefits of meditation and yoga on the physical, emotional, mental, intellectual and spiritual planes (Pancha Koshas) of a human being.

Just ask yourselves and introspect on the reason behind terrorism? It is lack of proper education and self-awareness. It is ideological differences of whose God is superior or wars between countries for the want of power and resources. Till we as parents and our schools do not embrace and communicate the importance of mutual respect from a Dharma perspective and experientially through yoga and meditation, it will become very difficult to prevent children and adults from getting brainwashed and radicalized by unscrupulous agenda driven individuals.

India with its rich heritage, diversity and culture is poised to show the way to the world. For this to be accelerated, the following quick corrective actions must be taken in our education system:

Jayaram Rajaram is the Managing Partner of Bril who writes from his heart on varied topics with a Mission to Make Living Fun for everyone. The broad areas he writes on include education, parenting, leadership and entrepreneurship.

The contents of this post are the opinions of the author and written purely with the intent to unite people and the world. Nothing in this post is meant to hurt anybody’s religious sentiments.